The Confession by John Grisham

The following book review appeared in the Tuesday, November 30, 2010 edition of The Daily Sundial: 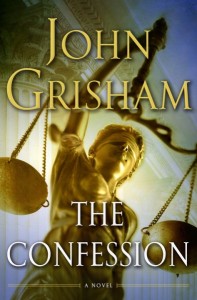 What would you do if a lanky ex-con walked into your office, plopped down on a chair, and proceeded to tell you that he had raped and murdered a high school cheerleader – and that, worst of all, someone else was going to die for his sins? In “The Confession,” John Grisham’s latest legal thriller, a humble small town minister is vaulted into a battle against time as he seeks to clear the name of Donte Drumm, a high school football player sentenced to death for a crime he didn’t commit.

While Grisham focuses on a few main characters, including Keith Richards, the minister, and Travis Boyette, the repenting ex-con, other characters are introduced at timely intervals throughout the story. There’s Donte Drumm, the aforementioned black high school football player who confesses to murder under the extreme interrogation techniques of the white, corrupt local police. Despite a complete lack of physical evidence and a proven romantic link between the prosecutor and the presiding judge, Donte is sentenced to death.

After wasting away physically and mentally for years on Death Row, his time is up: the execution is scheduled mere days away and the last minute appeals have all been denied. Unbeknownst to him, his only hope is Boyette’s confession and, even then, the confession may not be enough to stop the execution. There’s also Donte’s dedicated legal team, including his fiery defense attorney Robbie Flak. After trying for almost a decade to exonerate Donte, Flak proves to be so jaded that he refuses to hear Boyette’s confession. The clock continues to tick as the minister and his ex-con cargo race across state lines to save Donte.

These characters serve as Grisham’s soapbox on which to preach. While there are a variety of characters, many of them serve as merely faces for stereotypes: the minister conflicted about the “right thing to do”; the ex-con with a cane, a twitch, and a history of sexual abuse; the mother of the murdered cheerleader who soaks up all media attention; the corrupt racist lawyers and police that lock up an innocent boy; and even the bloodthirsty Governor of Texas that is willing to kill someone for an uptick in approval ratings. These one-dimensional aspects, however, are often unimportant as Grisham continues to weave an engrossing tale. The book’s four hundred pages start flying by as all you want to see is Drumm go free, the bad people pay for their sins, and the world to prove itself as an orderly and just place.

Having debuted as the number one best seller on the New York Times Best Seller’s list and sticking in the top three for the past three weeks, there is no doubt that Grisham continues his blockbuster record with “The Confession.” It is easy to see why his books, such as “The Firm,” are so easily adapted to the big screen: Grisham’s masterful writing keeps you on the edge of the seat from start to finish. Even the ending of “The Confession,” which stretches slightly longer than is typical, is gripping. For those readers that hate not knowing what happened to each and every character – “good” or “bad” – this book will definitely leave you with a good taste in your mouth. The last fifty pages are dedicated solely to giving a rundown of what happened to each character.

Ultimately, “The Confession” presents little new in the way of a unique storyline. However, the story is told extremely well and is quite enjoyable. Grisham does a fantastic job of shedding light on the legal machinations behind the death penalty, including some of their gaping flaws. As “Aesop’s Fables” has shown us for millennia, sometimes it takes a good story to really drive a point home.