The Giver by Lois Lowry

Every now and then it’s nice to pick up a book without absolutely any idea of what it contains. As a side effect of my frequent “Add to Wish List” sprees on Amazon, this tends to happen to me pretty often. I’ll add something that sounds interesting, promptly forget about it, and end up ordering it randomly or receiving it as a gift. I love it.

So, The Giver showed up on my desk and I had no idea what it was. It looked short – 200 or so pages – and the cover didn’t offer up any clues. It has a black and white picture of an old guy with a beard. Very provocative, indeed. He actually reminded me of the professor from Count of Monte Cristo and made me want to go watch the movie again. Yes, yes, I know, this is about book reviews, but I actually like the movie. Come on, it has Richard Harris! Fine, fine, back to the book review. 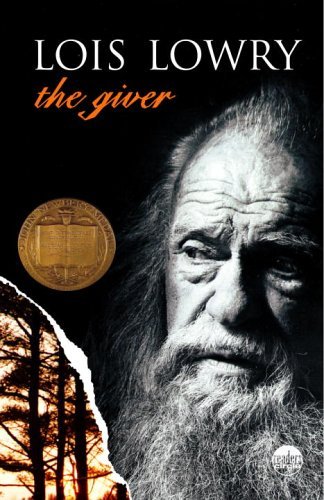 The Giver is set in a somewhat sci-fi world that is similar to our own, if maybe a little more technologically advanced. The community that the book takes place in is a neat, orderly society where nothing is left to chance. Feelings have been eradicated through years of careful manipulation. The population is tightly controlled and children are “assigned” to families regardless of their ancestry. Citizens are placed in their roles without any personal say, although the assigners watch each individual to try to make them as happy as possible.

The only strange technology that makes The Giver feel more sci-fi is the namesake: the Giver. This individual, selected for the task by his predecessor instead of being “assigned,” is responsible for being the bearer of memories. You see, in The Giver, memories aren’t stuck in your head. The Giver can transfer memories. And, if the Giver exits the area surrounding his community, the memories that he possesses are set “free,” and the community reabsorbs them.

The main story revolves around Jonas, the newest Giver. He must go through training and learn about life by living through memories. He must take on the burden of the current Giver’s memories, so he cannot be shielded from all of the knowledge that entails. Memories of snow, sunshine, color, lust, pain, and sorrow — things that do not exist as far as his community is concerned — become his burden.

The book itself goes by pretty quick, but I did find it a little slowly paced. I don’t know if it’s because supposedly for kids or not, but I think it could have been cut down to about half the size with the same impact. Not much really happens – instead, the author tends to spend a good chunk of time explaining the society that she has manufactured. Much of it is unimportant beyond stressing exactly how orderly and “safe” it is. An inordinate amount of time seems to be spent describing bicycles. What an honor it is to ride them. How they have bike stalls everywhere, where bikes should be neatly parked. The ritual “illegal” training of underage kids to ride bikes. And so on.

Memories are something I find really interesting and the idea that you can transmit them (more directly than by storytelling) seems like a neat idea. However, I’m not really sure what the point of the book is, if there is a point. The most obvious corollary would be Orwell’s 1984 for a more juvenile audience. The Giver doesn’t do a very good job of communicating the fear and oppression that comes across so readily in 1984, so the impact isn’t really felt.

In the end, maybe it’s seen as literature for young adults for a reason. I think that if I had read this prior to 1984 and some other eye-opening works, the message would have been better received. Once my brother starts popping out kids, I’ll have to pass this one on to his children.

This entry was posted in book review. Bookmark the permalink.