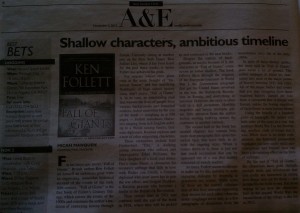 The following book review appeared in the Daily Sundial on November 2, 2010. I volunteered to do book reviews for the newspaper (on campus) gratis because, well, it’s obvious that I don’t have enough to do. There will be another one appearing next Tuesday, December 30, on John Grisham’s The Confession, which I’ll be sure to cross-post here. The tone of these articles is markedly different from those appearing only on my blog, as they are for a wider audience.

For his latest epic novel, “Fall of Giants,” British author Ken Follett set himself an ambitious goal: write an engrossing, somewhat historical account of the events of the early 20th century.  “Fall of Giants” is the first book of Follett’s Century Trilogy which covers the events of the 1900s and continues the author’s tradition of conveying history through fiction. Currently sitting at number two on the New York Times Best Sellers List, where it has been in attendance for the past three weeks, it seems as though Follett has achieved his goals.

For anyone whose eyes glaze over at the mere thought of “historical fiction” and has horrifying flashbacks of high school history class, don’t worry. “Fall of Giants” is, at its core, an entertaining read that weaves the lives of people from various backgrounds into historical context. Aided somewhat by the size of the book – weighing in at 958 pages – Follett introduces characters ranging from rich English nobility to a Welsh mining family, German diplomats, Russian orphans, and a host of other supporting characters. These viewpoints include Earl Fitzherbert, “Fitz,” a dashing young aristocrat that seduces and impregnates Ethel Williams, the fiery daughter of a local coal miner; Fitz’s sister Maud, a champion for women’s suffrage that falls in love with Walter von Ulrich, a German diplomat that must leave her to join the war effort; and Grigori Peshkov, a Russian peasant who becomes a leader in the Bolshevik Revolution. Their stories start in 1911 and continue until the end of the book in 1924, where they will be picked up and continued in the next books.

Despite the variety of backgrounds – or maybe because of it – the characters in “Fall of Giants” come across as rather shallow. The book follows them through the eruption of the European continent in World War I, the Zimmerman telegraph that got the United States involved in the war, the Bolshevik Revolution in Russia, and everything in between. However, the story is often told in a dull monotone. Horrible tragedies and heroic triumphs garner little attention from the author before moving halfway across the continent to another outlook. The second half of the book has several chapters that contain little more than paragraphs that start “The next day…” and spout historical facts that have little to do with the ongoing story. When it comes down to it, there is just not that much excitement that can be squeezed out of a war that mainly consisted of trench warfare.

In spite of these literary quirks, the story told in “Fall of Giants” does cover a lot of ground. The author manages to blend his characters into most of the major points of history between 1911 and 1924. All of the major battles and events that you may recognize from those required history classes are told from a viewpoint that is unique and human, unlike the boring repetition of facts found in most history books. Using the benefit of a hundred years of hindsight, the author tells both sides of the story in a way that portrays World War I as the frustrating, needless clash of troops that it was. While there is no overt commentary, the historical perspective highlights just how easily small misconceptions and bruised egos can have a devastating effect on the lives of millions of people.

By the end of “Fall of Giants,” the characters have gone through enough trials and tribulations that you really are interested in seeing how things turn out for them – just in time for the book to end. For those hoping to see how the characters fare in the second World War, the second book of the trilogy is due out in 2012.